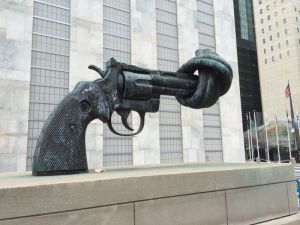 We enjoyed our visit to the United Nations this week. I joked to my wife that the UN is anathema to western Nevada County, where the gun culture reigns. But on our never-ending quest to introduce our son to multifaceted perspectives, we trudged onward.

The UN tour began with a big security check, then a walk along the promenade of the East River, with artifacts that included a good-sized chunk of the Berlin Wall.

Once inside we were introduced to a presentation on Palestine, “School in a Box,” FreeRice.com and “Plumby Doz,” and a Security Council meeting room where UN Secretary-General Ban Ki-moon was present.

The School-in-a-Box has become part of the UNICEF standard response in emergencies, used in many back-to-school operations around the world. The kit contains supplies and materials for a teacher and up to 40 students. The purpose of the kit is to ensure the continuation of children’s education by the first 72 hours of an emergency.

At FreeRice.com, for each answer you get right, the group donates 10 grains of rice through the World Food Program to end world hunger.

A highlight of our tour was a mosaic based a on a work by American artist Norman Rockwell, long a favorite attraction on tours of the United Nations that was re-dedicated following its restoration during the recent reconstruction of the headquarters complex.

Entitled “Golden Rule,” the work was presented to the UN in 1985 as a gift on behalf of the United States by then First Lady Nancy Reagan. The half-ton mosaic depicts people of different nationalities standing together with the words “Do unto others as you would have them do unto you” is inscribed on the surface.

We also were introduced to the United Nations Office for Disarmament Affairs. Colombian musician Cesar Lopez created the unique Escopetarra musical instrument and the only escopetarrist in the world out of an AK-47 rifle, which was on display.

In addition, while exiting the UN grounds, we saw the work shown in the photo above — a 45-caliber revolver with its barrel knotted that is titled Non-Violence and is frequently referred to as the “knotted gun.” It was created by Swedish sculptor Carl FredrikReutersward in 1980.

A cast metal version was gifted by Luxembourg to the United Nations in 1988. The piece makes an immediate impression, with its message quite clear. The inspiration for the piece was the death of John Lennon, a friend of the sculptors.