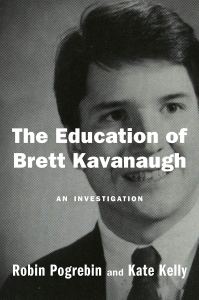 We’re excited to see Robin Pogrebin publishing her first major book “The Education of Brett Kavanaugh.” It includes a book tour this fall, with stops in San Francisco, among other cities.

In 1982, Robin was in my group in the Medill – Northwestern University summer program — Medill-Northwestern Journalism Institute — where graduate students like me were counselors/mentors for talented high school students like Robin who came to the Evanston campus near Chicago from across the nation.

Robin went on to the The New York Times. Her mom was a founder of Ms. Magazine. Congratulations Robin! We pre-ordered ours.

3 thoughts on ““The Education of Brett Kavanaugh””