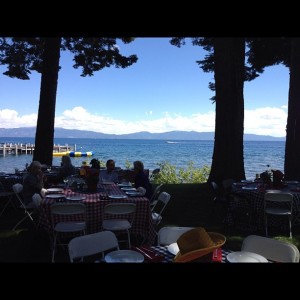 Mark Zuckerberg is our new neighbor on Tahoe’s West Shore. lol. He bought the Quist Estate, where we go each summer for the Lake Tahoe Ski Club Foundation’s asado barbeque fundraiser, as well as an adjacent estate, according to this morning’s Wall St. Journal.

“Mr. Zuckerberg bought the first property, known as the Carousel Estate and formerly owned by the family of the late investment banker Robert Quist, for $22 million in December, public records show. Dating back to around 1930, it sits on about 3½ acres with a rare marina-style pier designed to support a large yacht and has seven bedrooms. It had been on the market for as much as $32 million in 2017, according to Zillow . His family didn’t respond to requests for comment.” The Journal’s article is here.

A visit to the Quist Estate for the Ski Club’s fundraiser has been one of our favorite annual outings on the West Shore.  This lakefront event features a salute to the many Olympians from Tahoe’s North Shore who competed in alpine events of past Winter Games, including Julia Mancuso, Marco Sullivan and Daron Rahlves. A highlight of the event featured an authentic Asado barbecue by three-time Argentinean Olympian Osvaldo Ancinas.
I hope we still get to come over. Ha!