You can’t make this stuff up! In his near weekly blooper,  The Union’s weekly columnist George Boardman writes: “One of newest trends in the restaurant industry is the $15 lunch salad at upscale chains like Chop’t, Sweetgarden and Just Salad. This trend is so hot that Sweetgarden recently completed a $200 million round of funding that values the company at $1 billion.”

—An article in Forbes magazine, “Why $200 Million Will Make Sweetgreen The Next Big Thing In Delivery (And, Yes, A Unicorn),” is HERE.

“We want to go beyond a food company and become a platform,” Neman, Sweetgreen’s co-CEO, told Forbes in an exclusive interview after closing the $200 million round, which brings the company’s total equity raised to $365 million and values the chain at more than $1 billion.

—Or as Restaurant News reported: “Fidelity Investments has made a $200 million investment in Sweetgreen, bringing the fast-casual salad chain’s total equity raised over the past five years to $365 million, the company said Tuesday.  The Fidelity funding round values the 90-unit Los Angeles-based brand at more than $1 billion, the company said.”

I did, however, find a Chinese takeout joint in Queens called Sweet Garden (two words, not one). The menu is here.

You go George! Ringing in the New Year with another correction. 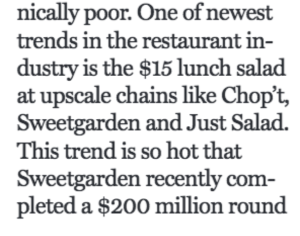