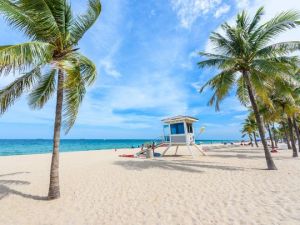 We stepped off the cruise ship this morning. It was a wonderful trip, spending “family time” together in short-sleeve weather. We’re going to linger in Fort Lauderdale for a few days for a trip down memory lane — and some fresh seafood.

I lived in Fort Lauderdale after graduating from Northwestern University with a master’s in journalism in the ’80s. I was hired at the Fort Lauderdale Sun Sentinel, and I wound up being promoted to the business desk and covering the airline industry, including the demise of Eastern Airlines, whose CEO was retired astronaut Frank Borman. It generated national news stories.

I also was a part-time reporter (or “stringer”) for The New York Times, helping the staff writer cover the beat, and I filed airline stories for the Chicago Tribune, the Sun-Sentinel’s “sister” newspaper. The Trib also owned the Orlando Sentinel.

Some of the articles I wrote are archived here. The computers were “dumb terminals,” not PCs. And I dictated stories into a telephone answering machine for The Times, where the reports were transcribed on the business news desk.

It was good times. I lived in a beach bungalow across the street from the ocean, and had a short commute down State Road “AIA” (the local coastal route) to work. I zipped around in a yellow, manual-transmission Toyota Tercel that I had driven at Cal but left behind when I went to Northwestern. The newspaper paid to ship it to Florida when I was hired.

Fort Lauerdale was a popular spot for “spring break” and the site of the ’60 Connie Francis film “Where the Boys Are.”

It was a great newsgathering town. One of my colleagues was Michael Connelly, now the best-selling author. The newspaper won a Pulitzer Prize for public service in 2013.

Since then, Fort Lauerdale has gone more upscale. “The area’s transformation from a haven for rambunctious college students on spring break to a budding upscale resort town reflects, in part, a spillover from Miami’s boom,” as The Wall Street Journal reported.

But some popular hangouts still remain, such as Southport Raw Bar, Cap’s Place, Shooter’s and Rustic Inn Crabhouse. We’ll visit some of them.