Good morning from Shanghai! Twelve at Hengshan is a stunning new hotel along tree-lined Hengshan Road in the French Concession neighborhood.

We landed in Shanghai around midnight after SFO-Hong Kong-Shanghai in about 19 hours (with a dinnertime stop in HK). Hong Kong Airlines was wonderful — new Airbus A350-900 (“all jet, no lag”), great airplane food and top-notch flight crew, plus a lounge in Hong Kong for dinner/drinks and a hot shower. 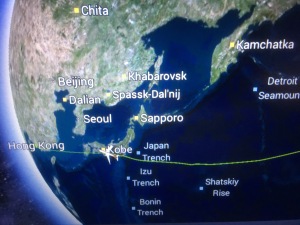 We landed at Shanghai (pop. 24 million) in totalitarian fashion, however: without a jetway, parked out on the tarmac. We walked down a steep ramp from our big jet, and loaded into a bus to arrivals (like the ’50s). China’s “paramount leader” 习近平 Xi Jinping did not meet us at the airport with an entourage. Instead, we were directed to the “foreigners” line, fingerprinted, and guided through a machine that measured our body temperature to stop the spread of flu and illnesses. It was all courteous and efficient.

I passed through customs and “Stockton” met me in “arrivals” and drove me to the hotel in a nice Mercedes sedan — about a 45 minute ride from the airport but no traffic. I checked into the hotel, was assigned to a room with a view of the tree-lined boulevard, and the bed already was turned down, with a bottle of water and slippers. Ha!

Prices are not expensive in Shanghai, thanks to a favorable exchange rate. The hotels are about a third less than S.F. or N.Y., for example. I’m looking forward to exploring this afternoon, eating lunch at a local cafe, and going to the Shanghai Symphony Orchestra – 上海交响乐团 tonight.

I’m going to spend time in different neighborhoods this week: this one, The Langham, Shanghai, Xintiandi; and Peninsula Hotel Shanghai on The Bund. Excited to see the sights.

A video of Shanghai is here.

4 thoughts on “Greetings from Shanghai”