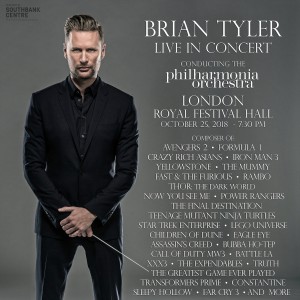 On Thursday night, I enjoyed watching Hollywood film composer Brian Tyler conduct London’s Philharmonia Orchestra in music from his most famous scores, including recent hits Crazy Rich Asians, Avengers: Age of Ultron, The Fate of the Furious, and Iron Man 3. It was a full house at the Royal Festival Hall.

Tyler’s films have grossed $12 billion worldwide, making him one of the most recognized and sought-after film composers working today. He told some amusing anecdotes and introduced us to his parents and French film director Louis Leterrier, whose films include the first two Transporter films, Unleashed, The Incredible Hulk, Clash of the Titans and Now You See Me. They were all in the audience.

A recent interview with the Irish Times is here. Here’s a video: