The latest City of Nevada City Manager, Catrina Olson, will earn a base salary of $115,000 per year plus generous benefits, according to an employment contract. Olson joined the city (pop. about 3,000) in 2007 as finance manager and has since been promoted to other positions including assistant city manager (as of October 2013).

The city manager’s position has turned over several times since then. This is Olson’s first job as a city manager (her predecessors were more experienced in city government), and it comes at a challenging time for the city.

Olson’s salary will be reviewed annually and “it is the intent of the City Council to increase salary, or other benefits referred to in this agreement during the five-year term of this Agreement, dependent on the quality of job performance by City Manager and the City’s fiscal condition.”

“The City of Nevada City Manager position became available July 29, 2018 (sic) when Mark Prestwich resigned,” a memo to the Council (see below) said. “At that time, the City Council appointed the Assistant City Manager, Catrina Olson, as the Acting City Manager.” (Most of us thought Prestwich resigned in 2017, not 2018, so that should be cleared up).

“The City Council did a recruitment for the City Manager role before making the decision, at the January 13, 2018 (sic), to appoint the Acting City Manager, Catrina Olson to the position of City Manager, which was accepted.” (I also think the word “meeting” is missing from this short memo. Oops!)

Other benefits include four weeks of paid vacation per year; 14 holidays per year; 80 hours of administrative leave per year; one day per month of sick leave; health insurance; life insurance; allowance for automobiles and cell — and retirement perks.

“Manager is a ‘Classic’ Miscellaneous member of the California Public Employee’s retirement system. Manager will be covered under the Nevada City’s 2.5% at age 55 formula. Manger’s contribution towards the retirement system will be the full employees share, of 8%, consistent with all other Miscellaneous Management and Supervisory employees. The City will pay the employer’s share to PERS and Social Security and Manager shall pay the employee contribution of Social Security.” 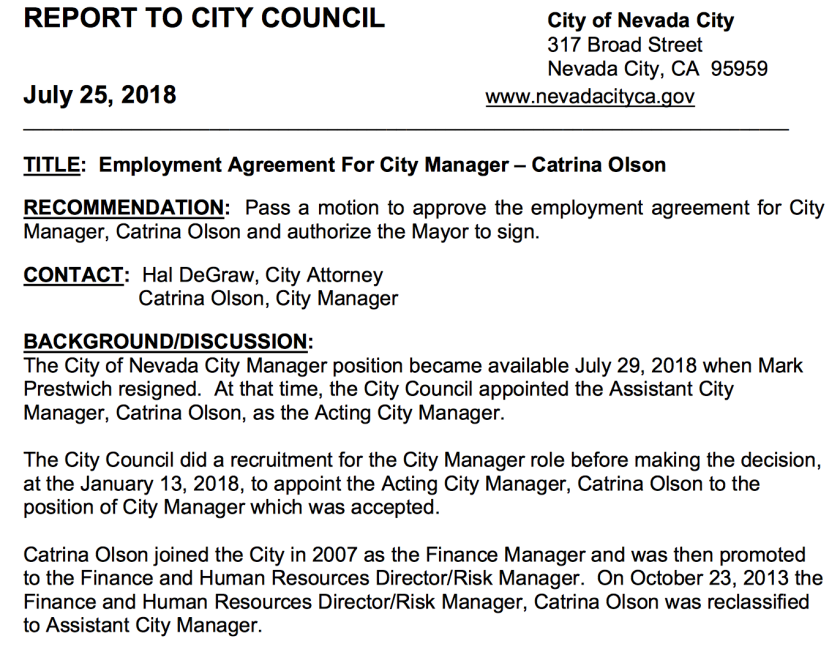 4 thoughts on “Nevada City’s latest city manager to earn base pay of $115,000 per year plus generous benefits”