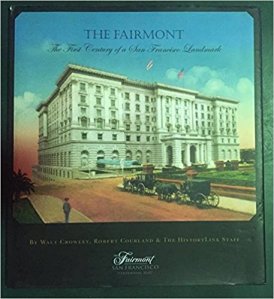 We returned to the Bay Area this weekend — this time to San Francisco to enjoy some of our favorite haunts. The reason for back-to-back trips is the looming expiration of our Fairmont President’s Club certificates, earned with prior stays and a branded credit card that is expiring now that Fairmont has been acquired by French-based Accor Hotels.

I love the Fairmont, a “grand dame” atop Nob Hill that was built in 1907. It stirs fond memories: The hotel is two blocks from my first apartment in San Francisco, when I went to work at The Chronicle in the ’80s (It was a small studio with a futon, kitchen, and bath but no parking near the corner of Taylor and Clay streets). I often walked past the Fairmont to ride the cable car to work — sometimes cutting through the lobby.

The hotel is next door to the historic Brocklebank building, where Herb “Ess Eff” Caen lived. The last publisher of The Chronicle before it was sold to Hearst, John Sias, lived in the Brocklebank too. Huntington Park and Grace Cathedral are other neighborhood landmarks, and I frequented both. (Herb’s memorial was at Grace Cathedral). 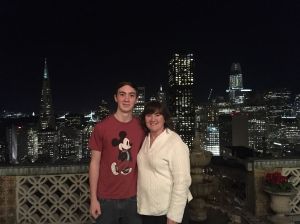 On the way to our room at the Fairmont this weekend we ran into two receptionists who were on their way to the hotel’s Penthouse Suite to prepare it for a visiting guest (a “king” we were told).

They looked at our inquisitive son, and we were invited for an impromptu tour of the luxurious suite. We had been once before for a party, back in the “go go days,” but were happy to go again, and I knew our son would enjoy it.

Created in the Roaring Twenties by famed American archaeologist and art historian, Arthur Upham Pope, the 6,000 square-foot suite epitomizes the opulence of the era.

The suite — which has been lovingly restored — features three bedrooms, a living room with a grand piano, a  dining room, antiques, exclusive china, a kitchen, a two-story circular library crowned by a rotunda, a billiard room coved in handcrafted Persian tile from floor to vaulted ceiling, and a terrace with sweeping views of San Francisco.

This time we learned some more stories — like the brightly colored lipstick that pop icon Katy Perry accidentally spilled on the wool carpet, as well as President Clinton’s impromptu walk from the suite onto the hotel’s rooftop, which caught the Secret Service off guard. The Kardashians also are 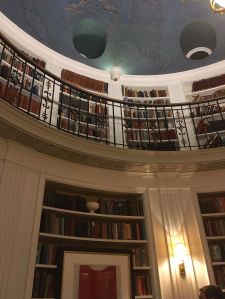 fans of the suite’s amenities, including its opulent bathroom.

Our private tour was a wonderful window into history. Later, we received a knock on our door and a housekeeper handed us an envelope with a card that read, “We hope you enjoyed touring the Penthouse as much as we loved showing it to you! Here’s a little history book about the Fairmont and all its glory! Enjoy the rest of your stay.”

The book is titled The Fairmont: The First Century of a San Francisco Landmark. It is a gem: well written and loaded with photographs. It will find a home on the shelf of our bookcase that includes all sorts of history books about California.

This month I added another book to our collection, thanks to a suggestion from local resident Niel Locke. It is titled, It happened at The National. I look forward to the restoration of our local hotel too.