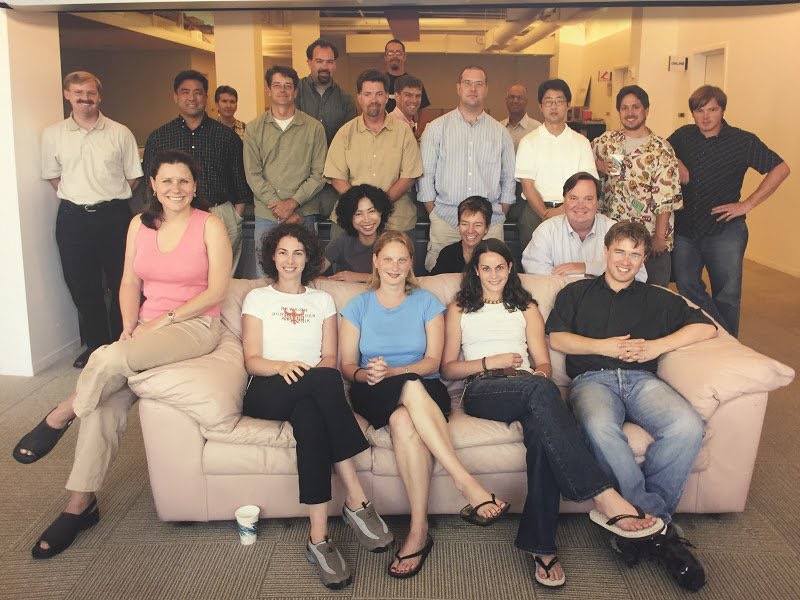 Our trip to San Francisco this weekend is bringing back fond memories of CNET, not just The Chronicle. Here’s a photo of the crew at CNETNews.com in September 2004, when I was Editor. We won numerous honors as a pioneer of online news starting in the ’90s, but the most prestigious was the National Magazine Award we won in May 2004. Three of us flew to New York to collect the award at the Waldorf-Astoria Hotel:

“CNET News.com, provider of breaking technology news coverage, features, and special reports and a property of CNET Networks, Inc. (Nasdaq: CNET) today announced that it won the coveted National Magazine Award for General Excellence Online. CNET News.com, which has been nominated for the award in the past, took it home for the first time today during a gala event at the Waldorf-Astoria Hotel in New York. This win is CNET News.com’s crowning achievement following dozens of prestigious award wins over the past year and a half.

“The National Magazine Awards, established by the American Society of Magazine Editors (ASME) in 1966 and sponsored by ASME in association with the Graduate School of Journalism of Columbia University, honor editorial excellence and encourage editorial vitality. In addition to their recognition of the best in print magazines, the General Excellence Online category recognizes outstanding magazine and Internet sites, as well as online-only magazines and Weblogs that have a significant amount of original content. It honors sites that reflect an outstanding level of interactivity, journalistic integrity, service and innovative visual presentation.

According to the ASME, “The [CNET News.com] site which promises ‘tech news first,’ does more than deliver technology news fast. It covers technology with in-depth, high-quality journalism. With a strong voice, but without being a cheerleader, it exposes the problems and highlights the victories of this changing field. The site’s use of multimedia, background reports and innovative presentation techniques helps both the tech savvy and the merely curious grasp various topics.”

The CNET News staff is sitting on a pink leather couch that one of the staffers rounded up for our sixth floor offices on Second St., near PacBell Park — a nod to the “dot.com” boom. It was good times. In a “tongue-in-cheek” gesture, we also purchased a massage chair from the Sharper Image, a longtime San Francisco business, for post-deadline stress.

Ours was a boom indeed. CNET was later sold to CBS for almost $2 billion — a coup for much of our staff who joined at the IPO. Thanks to Facebook, where this photo was posted in the summer of 2016, we stay in touch with one another. “This post is awesome. It’s like a virtual reunion,” commented one staffer on Facebook.