The Lobo fire, estimated at 900 acres, has resulted in 30 to 40 burned structures, and 8,000 people have been evacuated, according to the Nevada County Office of Emergency Services.

The fire is threatening 7,000-8,000 homes in Lake Wildwood, according to fire officials. The McCourtney fire has burned 80 acres. Large animals are being evacuated to the Nevada County Fairgrounds.

The 7,200-acre Cascade Fire also is burning in neighboring Yuba County, and another 2,000 people have been evacuated.

Governor Brown issued an emergency proclamation for Nevada, Butte, Lake, Mendocino, and Orange counties due to the effects of multiple fires. “Due to the Lobo and McCourtney Fires in Nevada County, we will be declaring a Local Emergency Proclamation at tomorrow’s Board of Supervisors meeting,” the County said.

The link for real-time reports on KNCO is HERE. The Cal Fire Twitter feed is HERE, and Nevada County Office of Emergency Services is HERE. On Facebook, people are offering room in their homes to evacuees, including us.

Most schools were closed. “This is Superintendent Louise Johnson with an important message for the Nevada Joint Union High School District.  Due to transportation interruption and evacuations because of the Logo and McCourtney fires, all schools in the Nevada Joint Union High School District are closed today, October 9, 2017.  We will update you as we know more.  Be safe and take care of your families.” 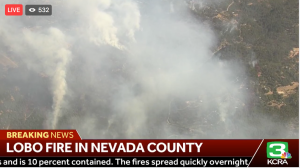 “Hello Ghidotti Families, I wanted to let you know that the Nevada County Campus of Sierra College is closed, so there will be now high school or college classes today, October 9. This is due to the fires. Stay safe and please let me know if there’s anything we can do,
Mr. Levinson”