From the current issue of Sierra FoodWineArt magazine:

AMERICA IS HOME TO SOME ICONIC MUSIC festivals: Lollapalooza in Chicago, the New Orleans Jazz & Heritage Festival, Telluride Bluegrass in Colorado and Norfolk Folk Festival in Virginia, among others.

In the West, the annual California WorldFest in historic Grass Valley has built a loyal following and is growing in stature. Last November, WorldFest received the 2016 “innovation in music” award for U.S. festivals from FestForums. Music industry magazine Pollstar calls WorldFest “a festival of discovery.”

“Honoring native peoples, emphasizing sustainable living, providing a friendly environment for families to gather and celebrating global cultures is our mission,” says Julie Baker, executive director of The Center for the Arts, an arts powerhouse in the foothills that has reinvigorated the festival. “We bring in musicians from every continent—well, except for Antarctica.”

Founded by Chico residents Dan DeWayne and Christine Myers in 1997, WorldFest came under the umbrella of The Center in 2015. Under cool, tall pines WorldFest transforms the Nevada County Fairgrounds into a “pop-up” world village, featuring eight stages of music; camping with family and friends; over 50 workshops in music, dance and wellness; international food; fine crafts; a renowned children’s program; and a Conscious Living expo-highlighting topics such as nutrition, solar building and stream ecology.

Over 5000 people per day attend the festival with over 60 percent coming from outside Nevada County, including other continents. We find WorldFest entertaining but also educational.

This year Michael Franti & Spearhead will close 2017’s festival on Sunday night. He and his band Spearhead are known for their authentic and uplifting music. Folk icon Peter Yarrow’s music conveys a message of humanity and caring. Seun Kuti has followed the political and social ethos of his father, digging deep into various African traditions.

WorldFest offers a family-friendly atmosphere for all ages. The areas include WorldFest playground, Teen Scene, California Kids Arts & Crafts and Brazilian-inspired Games on the Green. The WorldFest parade is an epic event for every age.

WorldFest kicks off Thursday evening, July 13, with a special 2-for-1 ticket price for Nevada County residents. Friday includes a late-night performance. The festival also is launching a program to encourage visitors to extend their stay and visit local shops, restaurants, museums and the Yuba River. 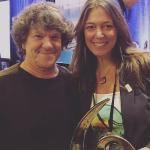 Best of the Fests
“Best of the Fests” is an annual awards ceremony recognizing North America’s festivals in the areas of innovation, sustainability, and charitable works. It is presented by FestForums, a national festival conference.

Last fall, FestForums presented the music festival innovation award to The Center for the Arts for California WorldFest. The national honor is a reminder of the innovation that is revitalizing the foothills’ performing arts scene.

The Center’s Executive Director Julie Baker accepted the award in Santa Barbara on behalf of the nonprofit’s team from Woodstock festival co-founder Michael Lang. For Julie, who grew up going to her family’s vacation home in Woodstock, it was like coming full circle. For more about The Center, visit TheCenterforTheArts.org.