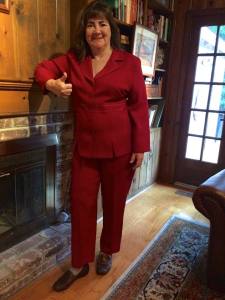 My wife, showing off her sense of humor,  is wearing a pantsuit from the back of her wardrobe this morning.

She bought it at Macy’s on Union Square around the time our son was born circa 2000, for Easter, I recall. And wore it to church at Grace Cathedral and brunch at the Big  4 restaurant (named after the “robber barons” Stanford, Hopkins, Huntington and Crocker).

According to Marjorie Jolles, a women’s studies professor at Roosevelt University, pantsuits are an essential tool for American women operating in spaces historically dominated by men.

In “WTF is a pantsuit anyway?”  one author writes: “Not until the 1970s did many women finally get dressed one leg at a time — like the other half of the population.”