From the blog of Sierra FoodWineArt magazine:

Violinist Joshua Bell is one of the world’s most popular classical musicians. The 47-year-old Gramercy Park, Manhattan, resident has recorded more than 40 CDs, performed for three U.S. presidents, as well as the president of China, and made his Carnegie Hall debut at the age 17.

In the next two weeks, Bell performs at Carnegie Hall, Chicago Symphony Center and Walt Disney Concert Hall in Los Angeles in a U.S. recital tour with pianist Sam Haywood. Then the famous violinist jets off to London, Vienna, and The Hague for more concerts.

On Sunday afternoon, however, Bell performed at the Seventh-day Adventist Church in Grass Valley, thanks to InConcert Sierra, a performing arts nonprofit whose roots date back to the 1940s. Thanks to his knack for programming, Artistic Director Ken Hardin has landed world-class talents including the Vienna Boys Choir, pianist Emanuel Ax, pianist Nikolai Lugansky and others.

We splurged on two tickets to see Bell perform at the InConcert Sierra concert. It was a magical experience and reminder of our top-notch arts and culture scene.

The sold-out crowd was truly spellbound as Bell performed.  As one commented: “It sounds like multiple violinists, not one.” The sweet sound of his 1713 Huberman Stradivarius violin (nicknamed “Strad” and worth an estimated $15 million) and a late 18th century French bow was mixed with tasteful vibrato, and it brought the crowd to their feet at intermission and after the concert.

In addition, he performed additional pieces that were announced from stage. One of them he performed on the Tonight Show with Johnny Carson when he was a teenager.

Bell, who grew up in Bloomington, Indiana, and studied the violin at Indiana University, dedicated the songs to his longtime teacher Josef Gingold, a Russian-born violinist. According to Gingold’s obituary in the New York Times,  he was “remembered as a vibrant man who played a paternal role in his students’ lives,” and this is how Bell remembered him.

Considering his enormous talents, Bell is a humble performer. “Thank you for coming,” he told the crowd, who chuckled at his unassuming nature, given his famous stature. “Well, you weren’t required to be here, were you?” he joked. 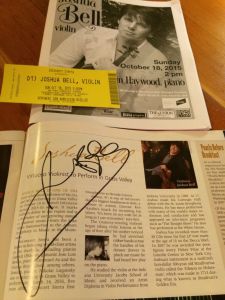 After the performance we met with Bell. We visited and had him sign a copy of our magazine, which featured his concert in Grass Valley in our summer issue, and he broke out in a big smile. “Who’s that little tyke”? I said, pointing to a photo of him in the magazine as a child prodigy violinist. He laughed.

After the concert, we were reminded of the world-class arts and culture scene in our region, comparable with any “big city” experience. We were sitting less than 40 feet from Bell, and the comparable seats at Carnegie Hall (“front parquet”) were more than twice that much — not to mention the plane fare and hotel.

This has become the rule in our local arts scene, not the exception. Later this year, for instance, we are going to visit Tokyo with our teenage son for a family vacation. We have arranged a concert at Suntory Hall to see Emanuel Ax. This world-renowned pianist performed for InConcert Sierra last year, right in our own backyard. Thanks to InConcert Sierra, Music in the Mountains, The Center for the Arts and all of our performing arts groups.