I don’t see this in Truckee, but the July 4 parade on our county’s western end is never complete without Tea Party Patriot and State of Jefferson political activists passing out their propaganda to the families that line the streets.

And this year’s parade in downtown Grass Valley was no exception.

Having said that, I enjoy the school marching bands, Grand Marshals, and imaginative parade floats from nonpartisan nonprofits. 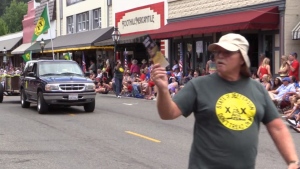