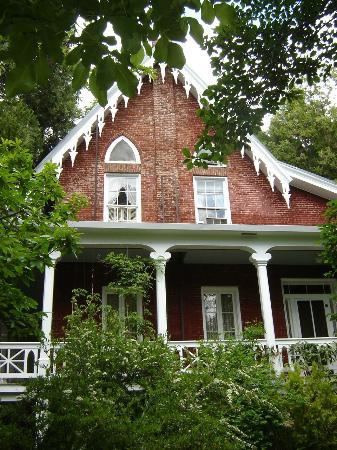 Mary Louise and Conley Weaver, innkeepers and owners since 1985, have retired. “All of our guests have enjoyed the inn,” Conley told me. “Now we’re looking forward to spreading out.” It has been an inn for 50 years, he added.

Weaver, an architect, is a former Nevada City mayor and has been active in civic affairs, including a needed measure to repave city streets. I met Conley when we moved to Nevada City nine years ago. We are UC Berkeley graduates and shout “Go Bears!” when we see each other in the community.

Built around 1860, the grand four-story brick mansion sits atop Prospect Hill, overlooking historic Nevada City. It is one of the few remaining historic lodging landmarks of the Gold Rush era.

The inn at 109 Prospect St. has received praise from Fodor’s and Gourmet magazine. “Antique furnishings and Oriental rugs decorate the rooms of this 1857 Gothic-revival mansion, a fine option for those who appreciate the finer points of Victorian design. The building’s brick exterior is trimmed with white-icicle woodwork,” according to the Fodor’s review.

Nevada City needs more lodging, so it is untimely that the Red Castle Inn is closing. It comes as Las Katarinas restaurant closed its doors after 10 years as older owners reached retirement age.

Is it a trend? It is certainly a fallout of our declining, aging population — a situation that should concern “electeds,” business, civic and economic-development leaders.

Conley and Mary Louise deserve some “R&R” from their “B&B.” Thanks for your efforts for so many years.

The Red Castle Inn was featured in this video: