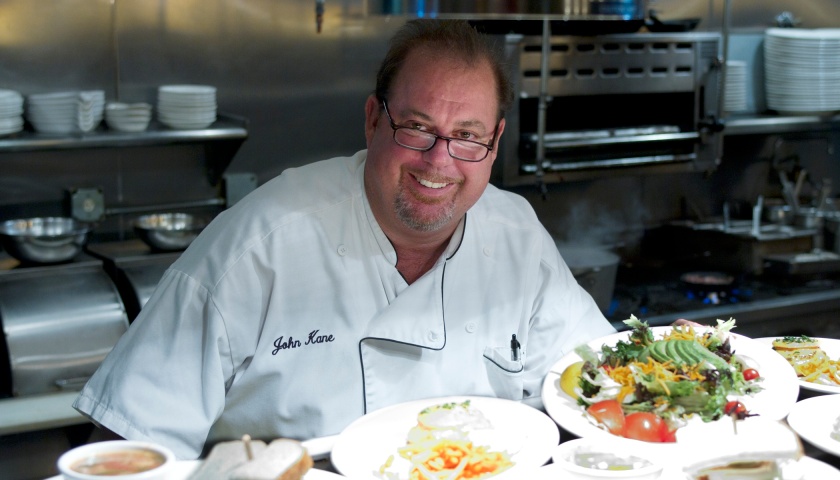 I stopped to refill my coffee cup this morning after working intently on updating our magazine’s website, and checked my email: I was stunned to read two emails from my friends, each one informing me about the unexpected passing of John Kane, owner of Kane’s restaurant in Grass Valley. I visited with one of them over the phone to discuss it.

John was a good friend of our family. We visited at the KNCO-Kane’s Penny Pitch this past weekend. He thanked us for our donation of a weekend getaway at Lake Tahoe for the Domestic Violence and Sexual Assault Coalition in Nevada County.

John bought me a Manhattan the week before, while I watched the Opening Day of the Del Mar horse races in his new lounge on HDTV. He joked in an interview on KNCO that it was an unexpected benefit of the new space: A place for people like me to sit and watch the Del Mar horse races, something we both enjoyed.

We both shared a passion for food and restaurants: He loaned me some Food & Beverage magazines that I’ve been meaning to return and are still sitting by my desk. Behind his jovial personality was a serious and accomplished chef. We shared many experiences: Original Joe’s, the Giants and the University Club in San Francisco.

Once we ran into John at the Peppermill in Reno, where he was playing in a charity golf tournament. He was holding court, just as he did at his restaurant.

Our last conversation — last week — was about the wonderful smells that define the mountain air of Lake Tahoe and beaches of Hawaii. He brought it up and I found it very perceptive. John also told me he was going to get a new boat for Scotts Flat.

He and Maria embraced our family, always asking our son about what he was up to in school. Some of the best visits were at breakfast, at Maria’s, early on Saturday mornings.

This photo is from our magazine by Lisa Redfern. We wrote about John here and here.