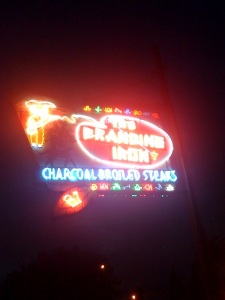 If you make it to Merced (the “gateway” to Yosemite) while traveling down Hwy. 99, check out the Branding Iron Steakhouse on 16th St.

Think of it as a rival to the Harris Ranch, the landmark steakhouse where travelers stop on I-5 going south to L.A.

Known as the “B.I.” to insiders, it’s a classic ’50-style steakhouse: An upscale version of the Willo, here in Nevada City. The menu is here. I sat in the lounge and watched the Giants-Phillies game.

I visited with some locals while I was in town: They reminded me it’s only about a two hour drive to Santa Cruz, as well as an easy road trip into the Sierra — an “outdoorsmen’s” paradise.

One sad sign: The foreclosure rates and people losing their homes in the Central Valley, stretching from Stockton to Merced, is a disaster. Some motel-like units have sprung up by the freeway, advertising weekly rates for occupants.

Lots of campaign signs along the way, and incumbents are getting upset. Details are here.

2 thoughts on “Merced’s Branding Iron Steakhouse instead of Harris Ranch?”